I Ran Out of Road

When things go better than hoped for.

GrandpasCan 2018 was my 14th year of using one big cycling event per year as my main platform from which to raise funds for MCF and create awareness about Mully Children’s Family.

These are never ordinary events and certainly the cycling outcome is far from certain. I have often said that I only have a 51% of accomplishing my cycling goal, but I have a 100% chance of making a difference to former destitute children. I am always good with that.

This was no different. I however tried an approach that would not work in my GWR rides and definitely not in RAAM. I was planning for an ‘end to my riding day’ around 10pm and a firm 5am start. After a shower and meal, I was asleep by 11pm and I woke up at 4am to coffee and a triple portion of oatmeal and a cream- cheese-loaded bagel. This gave me 5 hours of sleep, at least 2x as much as in RAAM or my 3 GWR record rides across Canada. What a difference that made.

On my drive up, I became rather concerned with the severity of the climbs, the poor to nonexistent shoulders, but mostly the packed down shale stones that seem to have become the standard for the Canadian portion of the Alaska Highway. To call it pavement would be generous.

Most of our 3000 km drive up north was done into strong swirling winds, gusting up to 80km/hour. Not a condition to be riding a bike in on a highway where every other vehicle seemed to be a large RV. I was nervous. No, I was scared.

When I started roding, the wind was calm and we began our journey south in a northern heat wave. Daytime highs were 28-30C and a nighttime low of 10-12C. Nearly perfect. Paul and Rick, my two-man support crew figured out a sustainable routine for them. They looked after me as good as I could have hoped for.
I needed to be at the Acadia Colony, 50 km west of Brandon, MB by 3pm, 7 days and 12 hours after I started. After cycling 3000km, I got there at 3:01, 1 minute late.

After 4 successful fundraising events in two days in MB, while still cycling about 200km, I changed crews. My wife Ruth and my nephew Juergen and his 14-year-old son Luke took over from Paul and Rick at 5am on Monday morning. The routine continued and worked flawless.

The US was embedded in a severe heat wave. The humidex reached the mid-forties.
When I was standing on the pavement at a red light, it was almost unbearable. There were times I thought I would pass out. Under the intense heat, my bike computer turned completely black one time.

The Appalachians created a new challenge, as the grades became very steep. The further south we went, the more traffic we encountered. At times the shoulders were virtually nonexistent and I had to keep a perfectly straight line on the edge of the pavement. We got through it.

The last day, riding the Florida Keys, I had a nice tailwind, making it most enjoyable. I even stopped and treated my crew to a relaxed breakfast.

I reached the buoy in Florida (the furthest point south of North America) at 4:56pm on July 5, a full 24 hours ahead of my best case scenario. In 2015, I had started this 9000 km journey in Deadhorse, Alaska, the furthest point north. After 2000km I crashed and broke 5 ribs. It felt fantastic to be able to finish what I had started.

I cycled 7000km in 19.5 days (about 360km/day) plus one day off in-between to speak at four events in MB. I felt great physically and mentally right after. I ran out of road before I ran out energy. If it was not for the Gulf of Mexico, maybe I would be at the southern tip of Argentina by now. (Just kidding).

Amazing what an extra 2.5 hours of sleep per night can do.

Thanks for your interest and support and prayers. Everything turned out better than I had hoped for. 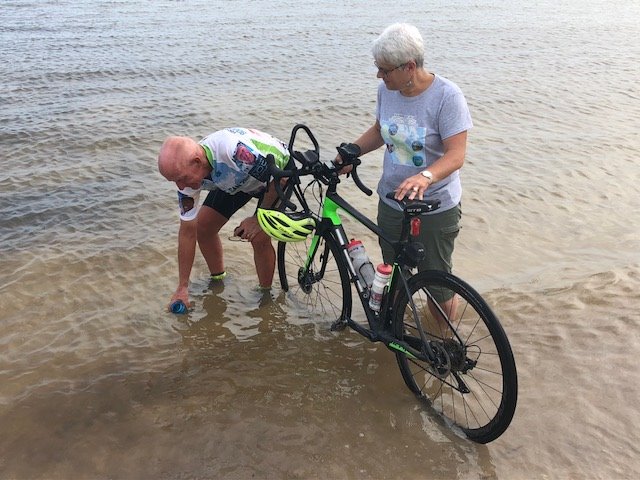 Posted in The Ride

To read the full project description, download the PDF.

To participate by riding your bike in support of MCF, download the PDF.

May 20: As the ride begins, pray that we will have strength equal to the task ahead!

Charles Mulli is a former street child from the slums of Kenya. He became extremely successful in business, but then God called him to give it all up and care for the orphaned and abandoned children still on the streets in Kenya. Charles Mulli is the founder and CEO of Mully Children's Family. To learn more about MCF, click here.

God has called me (Arvid) to be an ambassador for Mully Children's Family. I have chosen to use ultramarathon cycling as my platform from which to fulfill this calling. You can follow my ride, here, at www.grandpascan.com/ride. To read more about me and my story, click here.

I am asking you to help. I am trying to raise funds for the ongoing and capital expenses for the child mothers program at MCF. This program provides the critical life skills the young mothers need. To learn more about donating, click here.